Lists the resources in the Newton Free Library's local history collection known as the Newton Collection.

Annotated list of Atlases and Maps available by Dewey call number in the Newton Collection as of June 1, 2015.

The Newton Collection maintains many atlases and maps of Newton, MA in hard copy and on microfiche.  Below are found direct links to  Newton [MA] Atlases and Maps; to view these digitized items please click on the Blue colored links below.   The Sanborn Fire insurance atlases provide information about property boundaries, plot size, ownership, building shapes, and materials.

Where is the village of Chestnut Hill

Chestnut Hill actually encompasses three different municipalities; part of the town of Brookline, the city of Boston—Brighton and West Roxbury—, and the city of Newton.

For an in depth discussion  of the history and boundaries of Chestnut Hill see the John T. Burns Library Blog here.

Annotated list of items available by Dewey call number in the Newton Collection as of June 1, 2019 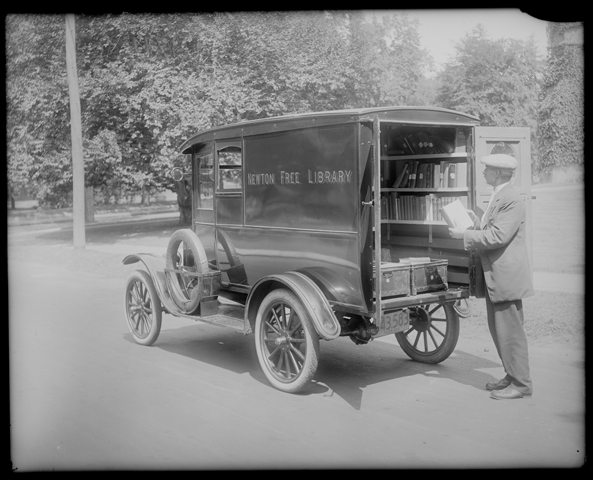 "The greatest time saver of the year was effected by the transition of our delivery service from horse and wagon to automobile. What was literally a "one-hoss shay" was replaced by a trim little Ford runabout with a delivery body attached."

The Newton Collection maintains many titles under the subject area of Bibliographies and Libraries in hard copy and on microfiche.  Below are found direct links to some titles that have been digitized; to view these digitized items please click on the links below.

A Short History of the Newton Free Library

The Boston Herald of April 15, 1865, reported that "a spirited meeting was held in Newton last evening to take steps at establishing a free public library in that town."

There were several private library societies serving the villages of Newton; the Social Library Society of West Newton, the Adelphian Library and the Newton Centre Library Association.

In 1866, the members of the Newton Library Association, purchased land in Newton Corner for the purpose of establishing a public library for the residents of Newton.  Also, private donations given from some of Newton's wealthy citizens, most notably, Jonh Farlow of Newton Corner made the library possible. The   building was designed by architect Alexander Rice Esty.   Construction began in August 1868 and the Newton Free Library was dedicated less then two years later on Friday June 17, 1870.  The NFL opened to the public on July 1, 1870.

A note about the words free library:  in the  late 19th and early 20th centuries the word free library differentiated  a library that was fully open to the public from the subscription libraries of the day, such as Social Library Society of West Newton and  the Adelphian Library which were available only to paying members. Thus we have a public library in Newton, Massachusetts named the Newton Free Library.

Annotated list of items available by Dewey call number in the Newton Collection as of June 1, 2015.

The Newton Collection maintains many directories and guidebooks of Newton, MA, in hard copy and on microfiche.  Below are found direct links to  Newton [MA] Directories and Guidebooks; to view these digitized items please click on the links below.