Teens: We need your help!

The idea for Newton Reads started with teens.

As a teen in Newton, your voice is something we really want to hear. So we would love for you to take an active role in leading discussions for the Newton Reads book, The Beginning of Everything by Robyn Schneider. One of the programs in October will be a book discussion on Thursday, October 30 at 7:00 pm at the Library. We're inviting the community (teens and up), to be involved in conversations brought up in the book.

We'll be meeting the beginning of September (There will be food. PROMISE!) to plan the book discussion event on 10/30. We'll be coming up with questions, creating a discussion guide, and looking for volunteers to help run small discussion groups about the book during the event. To become involved, email: teens@newtonfreelibrary.net

Newton Reads... The Beginning of Everything 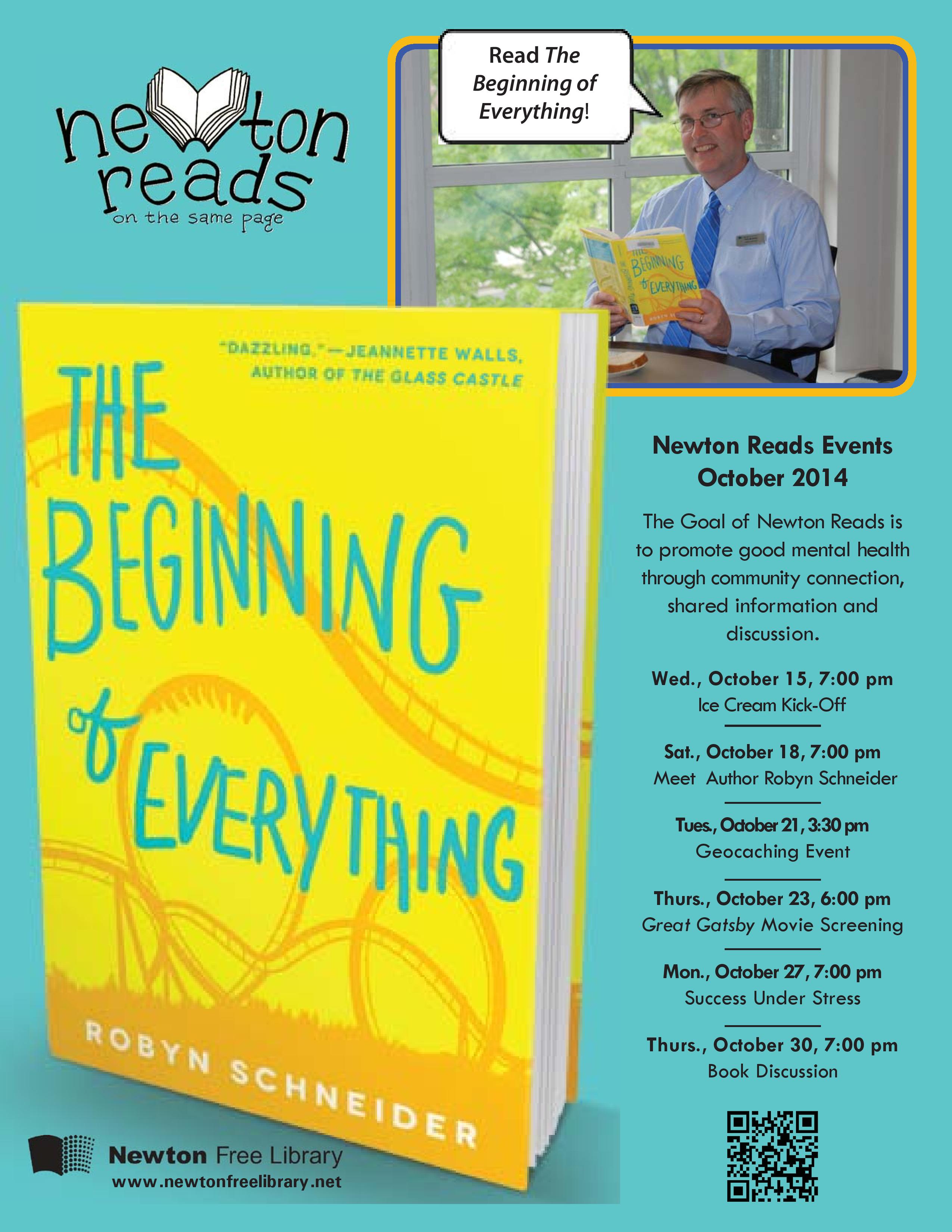 Books & Beyond: Liz on NewTV

What questions would you like to ask the author?

On Saturday, October 18 @ 7:00 pm, you can meet Newton Reads Author Robyn Schneider at a special author talk and signing. Robyn will be flying in from California to discuss The Beginning of Everything, followed by a Q&A and signing with books provided by New England Mobile Book Fair. Use the Comments link below to post your questions for Robyn.

This book tells the story of a star athlete. He is rich and popular, but one day, a mysterious car crash cripples him for life. Ezra will never play tennis again. He is reduced to a nobody. He is friendless, but he could have still have one friend, but Ezra shunned Toby when there was a traumatizing incident where Toby caught a decapitated boy's head at Disneyland. But life progresses, and Ezra meets a girl named Cassidy. Ezra, Toby, and Cassidy happen to be in several of the same classes. What happens next will be a rollercoaster of friendship, love, and anger. -- Review by Anshul

This was a great read. It illustrates the life of Ezra Faulkner after his tragedy. He falls in love with Cassidy Thrope and reunites with his old friend Toby. Ezra enters a different world as he joins the debate team with different friends and discovers the beauty of life. This book has great detail and plenty of wit! -- Review by Douglas

I was genuinely surprised when reading this book, it was filled with everything I didn't expect to happen. To see the main character, Ezra, change his life around after one accident made him a better person. Definitely something to read. -- Review by Gina

This book was one of the best books I have read! Ezra Flaunker, a senior and a golden-boy, shattered his life when a reckless driver hit his car (I’ll get into detail later). Suffering but living at the same time, his old popular crowd dumped him, and his girlfriend cheated on him, but fortunately, his old friend Toby, who suffered from severed head on his twelfth birthday, invited Ezra to join his group of friends, “the nerds”. There, Ezra encounters new girl Cassidy Thrope, whom he later on falls in love with. Cassidy is not like any other girl Ezra met. For beginners, she is “hiding” a part of her from the world, which we know when it was told that she suddenly disappeared from debate tournaments, regardless of being the champion of debates. This book reminded me of The Adoration of Jenna Fox by Mary Pearson. They have a similar plot-- the majority of the story felt like there is something hidden and makes you quite confused. And when the end emerges, you feel like the plot ...-- Review by Shelley

I mostly liked this book. I thought it was very well-written. I liked how the author used plenty of humor and how the dialogue & relationships were realistic. However, sometimes I felt the plot or the writing strayed towards the cliche. The ending was a little bit strange as well. I felt some parts of it were unnecessary. However, I still enjoyed the writing very much. -- Review by Eve